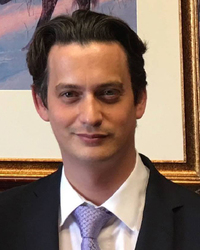 Ellie earned a master’s degree in European Studies with honors from the University of Dusseldorf Germany and a bachelor’s degree in Government with honors from the Interdisciplinary Center (IDC) of Herzliya Israel. He also holds academic certifications in European Union law, trade, & foreign affairs, conflict resolution, and international relations, and has studied at one of the oldest diplomatic school in the world in Vienna Austria. He has served as an expert panelist at London Center congressional briefings and policy conferences. Ellie has also served as a professor at the George Washington University.