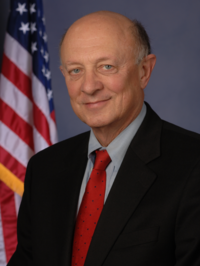 Ambassador R. James Woolsey was the Director of Central Intelligence for the United States Central Intelligence Agency (CIA) from 1993 to 1995.  He’s been appointed by Presidents to positions of leadership during the administrations of Jimmy Carter, Ronald Reagan, George H.W. Bush, and Bill Clinton. In a town riven by partisan divisions, Ambassador Woolsey is widely respected on both sides of the aisle.

A national security and energy specialist, Ambassador Woolsey chairs the United States Energy Security Council. He is also a Venture Partner with Lux Capital and is a member of the Strategic Advisory Group of the Paladin Capital Group, a multi-stage private equity firm.

Ambassador Woolsey has held Presidential appointments in two Republican and two Democratic administrations, most recently, from 1993 to 1995, as Director of Central Intelligence under President Bill Clinton. During his twelve years of government service, in addition to heading the CIA and the Intelligence Community, Ambassador Woolsey was Ambassador to the Negotiation on Conventional Armed Forces in Europe from 1989 to 1991, Under Secretary of the Navy from 1977 to 1979, and General Counsel to the U.S. Senate Committee on Armed Services from 1970 to 1973.

He was appointed by President Reagan to serve in Geneva, Switzerland, from 1983 to 1986 as Delegate at Large to the U.S. Soviet Strategic Arms Reduction Talks (START) and Nuclear and Space Arms Talks (NST). As an officer in the U.S. Army, he was an adviser on the U.S. Delegation to the Strategic Arms Limitation Talks (SALT I), in Helsinki and Vienna, from 1969 to 1970.

From July 2002 to March 2008, he was a Vice President and officer of Booz Allen Hamilton where he focused principally on energy and security. Previously, he was a partner at the law firm of Shea & Gardner in Washington, DC, now Goodwin Procter, where he practiced for 22 years in the fields of civil litigation, arbitration, and mediation.

He has also served as a member of boards of directors of a number of publicly and privately held companies, generally in fields related to technology and security, including British Aerospace, Inc., Martin Marietta, Fairchild Industries, and Yurie Systems, Inc.

In 2009, he was the Annenberg Distinguished Visiting Fellow at the Hoover Institution at Stanford University; and from 2010 to 2011 he was a Senior Fellow at Yale University, where he taught in the Jackson Institute for Global Affairs.

He is a frequent contributor of articles to major publications, and gives public speeches and media interviews on the subjects of energy, foreign affairs, defense, and intelligence.