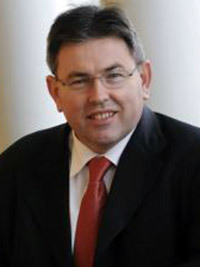 Derk Jan Eppink (born 7 November 1958) is a Dutch writer and politician, and former cabinet secretary for European Commissioners Bolkestein (1999–2004) and Kallas (2004–2007). In 2009, he was elected to the European Parliament for a Flemish party and sat on the European Conservatives and Reformists Group (ECR) Executive as Vice-President.

Eppink was born in Steenderen, Gelderland. He studied Dutch law at the VU University in Amsterdam (1977–1981) and thereafter European law and International Politics at the University of Amsterdam. In 1984 he moved to Brussels to become trainee at the European Commission. Thereafter he worked for 3 years as assistant to Members of the European Parliament.

In 1987, Derk Jan Eppink joined the Dutch newspaper NRC Handelsblad where he was assigned to the foreign desk. He covered South Africa (the release of Nelson Mandela), worked as correspondent in Poland and became political editor reporting on Dutch politics in The Hague. In 1995, he moved to the Flemish newspaper De Standaard where he reported on Belgian politics. He wrote two books on his experiences in Belgian politics: Vreemde Buren (Odd neighbors), Avonturen van een Nederbelg (Adventures of a Nederbelg).

In October 1999, he started working as member of cabinet of Dutch European Commissioner Frits Bolkestein. He was Bolkestein’s liaison with the European Parliament, speechwriter and also assigned to liberalization of postal markets. In 2004, in co-operation with Bolkestein, he published the book The Limits of Europe. In October 2004 Eppink joined the cabinet of Siim Kallas, European Commissioner from Estonia, responsible for administration, audit and anti-fraud. In March 2007 Eppink published his book ‘Life of a European Mandarin’ describing his experiences in the European Commission. The book has been published in Dutch, English, French Estonian and Czech.

In 2007 Eppink moved to New York City as his wife worked for the United Nations. He reported on the 2008 American presidential election for Flemish and Dutch magazines, radio en television. He wrote a column on foreign affairs for Dutch weekly Elsevier and is contributor to various Dutch radio and television programs, like NOS Met het Oog op Morgen and RTL Business Class.

In 2009, Eppink returned to Belgium to run for the European Parliament for the List Dedecker party. He co-founded the ECR with the British Conservatives. In the European Parliament he became member of the Economic and Monetary Committee, the International Trade Committee, the Budget- and Budget Control Committee. He also joined the parliamentary delegation with the US and China. In 2010 he published another book on the EU: ‘The Tower of Babel is in Brussels’. During his term as European politician (2009-2014) he wrote a bi-weekly column on international affairs for the newspaper NRC Handelsblad and thereafter De Volkskrant.

As senior fellow of the London Policy Center, Eppink is specialized in European affairs, Russia and also in economic, monetary, trade and energy policies.