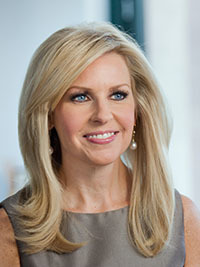 Monica Crowley served as a political and foreign affairs analyst for the Fox News Channel, the Online Opinion Editor of The Washington Times, where she also wrote an influential weekly column, and is a New York Times bestselling author.

She was also a regular panelist on The McLaughlin Group, the host of the nationally syndicated radio program, The Monica Crowley Show, and an anchor on NBC and MSNBC, where she co-hosted two hours of daily programming, “Coast to Coast” (2005-2007), and anchored “The Early Today Show” for NBC News.

She also served as Foreign Policy Assistant and Director of Communications for former President Richard Nixon from 1990 until his death in 1994. In that capacity, she served as the President’s chief strategist and foreign policy adviser and coordinated all strategic messaging and media relations for him and his office.

During her years working with the former President, she traveled around the world with him (Russia, China, eastern and western Europe, throughout Asia), met and coordinated with all of the heads of state with whom he met, and worked closely with him on his media strategy, speeches, op-eds and final two bestsellers, Seize the Moment (1992) and Beyond Peace (1994).

She wrote two bestsellers about her experiences, Nixon Off the Record (Random House: 1996) and Nixon in Winter (Random House: 1998).  She is also the author of The New York Times bestseller, What The (Bleep) Just Happened? The Happy Warrior’s Guide to the Great American Comeback (Broadside Books: HarperCollins, 2012).

She has written for The New Yorker, The Wall Street Journal, The Los Angeles Times, Newsweek, The Baltimore Sun and The New York Post, and she served as an editor at Talk magazine (2000-2001) and Regan Books (Harper Collins) (2002-2004).

She was awarded the “Woman of the Year” prize by the Clare Boothe Luce Institute at the Conservative Political Action Conference (2010) and received the “Excellence in Journalism Award” from the Women’s National Republican Club (2014).

She graduated from Colgate University with High Honors in Political Science (1990) and holds two Master’s degrees (M.A., 1994 and M.Phil., 1995) and a doctorate (2000) in International Relations from Columbia University.