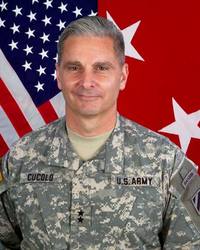 Tony Cucolo completed more than 35 years of service in the United States Army on September 1st, 2014. Serving as a General Officer in the last eleven years of his career, he developed a remarkably unique portfolio of experience. In just last the last decade, he led Soldiers in Afghanistan and Iraq, led analysis teams in combat zones and on natural disaster recovery efforts such as Hurricane Katrina, commanded the largest Army base east of the Mississippi, developed the $35B equipment program for the Army, served as the US Army’s Chief of Public Affairs, and was most recently a college president equivalent, serving as Commandant of the US Army War College.

Growing up in a small town in southern New York, Tony commuted by train and subway to St. Francis Xavier High School in Manhattan before attending the US Military Academy at West Point. He was commissioned an Infantry officer in 1979, and has served worldwide leading organizations varying in size from 100 personnel to 22,000. Over half of his 35 years in uniform have been spent directly leading operations. Most notably, three times in the last twenty years he led organizations in significant high risk confidence-building efforts between ethnic and religious antagonists. In Bosnia, he encouraged Muslim, Serb, and Croat leaders to reach agreements on a range of issues, bringing stability to a hotly contested area. In Afghanistan, he led initial tripartite efforts between US, Afghan and Pakistan military leaders in the areas of border disputes and information sharing. And in Iraq, as commander of US forces running counterinsurgency operations  in the seven provinces north of Baghdad, he successfully emplaced a grass-roots effort to build confidence between Iraqi Arabs and Iraqi Kurds along the disputed ethnic fault line crossing that nation from Syria to Iran.

Tony is now the Associate Vice Chancellor for Leadership Development and Veterans Affairs for the University of Texas System. In this dual-hat capacity his duties include leader development of undergraduate students, graduate students, and executive academic and medical leadership across the system, as well as responsibility for coordinating support for all veterans and military related students and employees. Additionally, he is a senior mentor for two US Army leader development programs.

Tony holds a bachelor's degree from the US Military Academy and a master’s degree from the University of San Francisco. Among his awards are three Distinguished Service medals, the Bronze Star, the US State Department Superior Achievement award and the French Legion of Honor. Tony and Ginger, his wife of more than 30 years, have three grown children, a devoted Great Dane, and have made their twenty-seventh move to a home in east Austin.