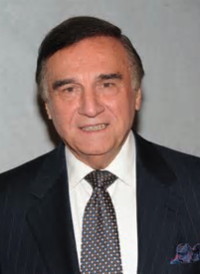 The career of actor Tony Lo Bianco is distinguished as much by its depth and variety as by the skills and gifts Mr. Lo Bianco brings to his work. He has appeared in over 100 films, television programs, and stage performances, both on-screen and off as a writer, director, and producer. Throughout his career, Mr. Lo Bianco has collaborated with many of the brightest creative minds in the performing arts, both past and present.

Mr. Lo Bianco served as the National Spokesperson for the Order Sons of Italy. His many humanitarian efforts have earned multiple awards, including the Eleanora Duse Award for Outstanding Contribution to the Performing Arts; Man of the Year for Outstanding Contributions to the Italian-American Community from the Police Society of New Jersey; a Man of the Year Award from the State of New Jersey Senate; a Lifetime Entertainment Award from the Columbus Day Parade Committee; the 1997 Golden Lion Award; and the Humanitarian Award of the Boys' Town of Italy, and the Ellis Island Medal of honor.  He is a member of the Italian American National Hall of Fame and just this year received the Louis Prima Arts and Entertainment Award.