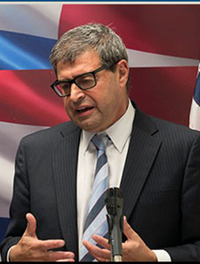 Luis Fleischman has worked as senior advisor to the Menges Hemispheric Security Project at the Center for Security Policy (CSP), focusing mostly on Latin America and its challenges to democracy, regional stability, and U.S. national security. He is the co-editor of the CSP publication The Americas Report and the author of Latin America in the Post Chavez Era: A Threat to U.S Security (Potomac Books, 2013), a comprehensive analysis of Venezuelan President Hugo Chavez’s revolution and its impact on the region’s human rights and democracy. Likewise, he has focused on how the regime in Venezuela has created a security problem for the region and the United States.

Dr. Fleischman has also worked in the Jewish Federation system for almost three decades in both the Jewish Federation of Palm Beach County, Florida and Central New Jersey as Vice-President and Executive Director for community and political relations. In that capacity, he has worked intensively on issues related to the Middle East and national security, serving as a liaison between these organizations and members of Congress, foreign consuls, the media, and the local community at large. He has dealt with issues related to the threat of a nuclear Iran, advocated for the security of the State of Israel, and other issues related to counterterrorism efforts. Within that role, he played a leadership role in the effort to apply sanctions on Iran in the State of Florida, the first state to impose such sanctions.

In that capacity, Fleischman was also in charge of organizing programs and activities aimed at combatting anti-Israel boycotts and educating the community of Palm Beach County and beyond about the distortions of the Boycott, Divestment, and Sanctions (BDS) movement. He is currently working on a book that addresses the issue of Israel’s legitimacy and corrects the falsehoods spread around the Israeli /Palestinian conflict. Fleischman also writes regular opinion pieces in outlets such as Newsmax, The Americas Report (Center for Security Policy), Americas Forum, and The Cutting-Edge News. His articles have been reproduced on many websites and publications, particularly in the United States and Latin America. He has written congressional testimonies on Latin American affairs and regularly provides briefings to members of Congress and staffers.

Dr. Fleischman is a frequent guest of TV and radio programs in English and Spanish in the U.S and Latin America. He is a regular guest on CNN en Español, Newsmax, MegaTV, NTN 24 and other TV networks. He has also appeared on C-SPAN Books, various Florida local channels, Mega TT and America Teve.

Additionally, Dr. Fleischman has written many academic and journalistic articles on issues related to national security, Latin America and the Middle East. Such articles have appeared in The Journal of International Security Affairs, Small Wars Journal, Global Antisemitism (Institute for the Study of Global Antisemitism), the Middle Atlantic Council of Latin American Affairs (MACLAS) Review, and InFocus Quarterly Journal. Academics and analysts have also frequently cited Dr. Fleischman in essays and articles.

Dr. Fleischman is currently an adjunct professor of Sociology at Barry University, Florida. He was also an adjunct professor of Sociology and Political Science at Florida Atlantic University Honors College and FAU Lifelong Learning Society. Likewise, he has taught Sociology and Political Science at Kean University, New Jersey. He also served as a member of the team of foreign policy advisors in the 2012 Romney for President campaign as part of the team that advised Governor Romney on Latin American Affairs and U.S foreign policy in the region occasionally providing advice on Middle Eastern affairs.

Dr. Fleischman holds a Ph.D. in Sociology from the New School for Social Research in New York City, an M.A degree from the New School, and a B.A in Political Science and Labor Studies from Tel Aviv University. He is fluent in English, Spanish, and Hebrew.